A New Understanding of the Solar System 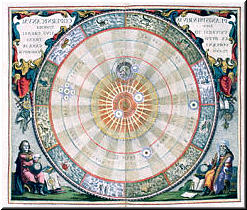 Galileo, Kepler and others helped to move us from our geocentric view of the universe, but even in the 21st century, science still expresses the planetary relationships of solar system using the "Astronomical Unit," the distance of the Earth from the Sun.

Other than the fact that we inhabit the Earth, is there any logical reason to base these relationships on the third planet of the system? Are we still geocentric, and backwards, in our thinking?

Take a new look at the solar system and see the incredible relationships that result when Mercury, the first planet, is used as the base measure for the other planets.

Intriguing mathematical relationships appear based on the orbital distances of the planets:

These result from simple, yet elegant, geometries that define the distances of planetary orbits:

These geometries are simplified versions of the original Solar Geomety drawings by Alan Bennett that reveal more intricate interrelationships yet between the planets:

This was all unveiled in visions that came to a commercial sailor, after a mysterious experience one night at sea. Expore the Solar Geometries of Alan Bennett, and gain a new understanding of the solar system.